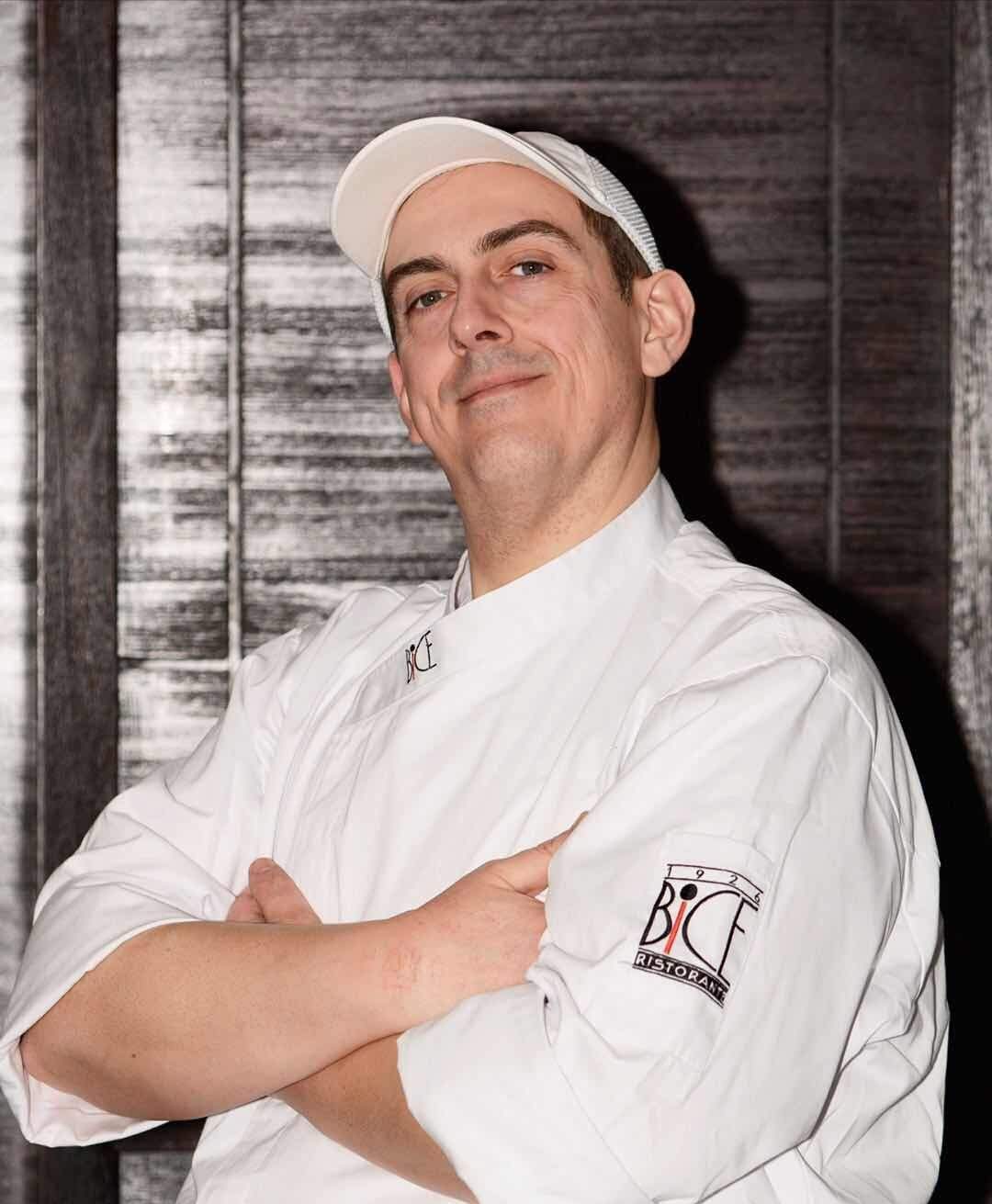 Hello, as you know my name is Fabrizio Sacchi and I was born in Rome on September 1st, 1975 to Roman mom and pescase dad. I grew up in the province of Rome, in a village of about 8,000 souls called Rignano Flaminio and I started my studies and then attended the G Scientific High School. Piazzi in Morlupo and following the Faculty of Architecture of La Sapienza for two years and the third year at the Third University of Rome. I did not finish my studies because Architecture was just a passion, which I had left, but that would never represent my professional activity.

I have always been a lover of cooking and I started cooking, attached to the skirt of mom Maria Augusta and grandmother Goddess, at the tender age of 8 years. I don't tell you the joy when my father Bernardino, he built a wood-burning oven in the garden... When I was 11, I was already dabbling in that toy.

I have always been a hyperactive type and for twenty years I worked as a creative graphic designer, I went to university, I did theater (with the Odeidon Theatre Company under the skilled and enlightened guidance of another great mentor of mine, Professor Alessandro Molfese), country archery and traditional Kung fu... You may wonder how... Boh... I don't know... I was a really volcano, in the meantime of course I found time to play, go out, have fun and fall in love. Precisely because of this passion for cooking and for the amount of friends I had, together with two other friends, I organized at my house (300 square meters of villa in full 80s style) almost every Saturday, dinners with 30, even 40 friends ... really memorable moments, really.

At the age of 16, I happen to find i was working in Rome in an advertising graphics company: Ikonos Computer Graphics, my second mentor Luigi Canali De Rossi, today legendary information technology guru that you can find and follow looking for Robin Good on various social media. Working and studying with "Giggi" and my dear friend Simone Morini, I discovered my passion for advertising graphics, a passion that represented for about twenty years a large part of my working and professional life.

In 2004, after working in a printing house for three years, Gemmegraf snc in Rome, and after holding the role of head of communication and advertising graphics for a metalworking company in my country, Marmo Elettromeccanica, I decided to open my first company: Argo's Network sas and I immediately made a great success in advertising graphics both printed and on the web. It was the dawn of the new computer age. Google was still relatively small, think that adwords, Google's advertising system, was born very little and Facebook arrived only 4 years later in Italy. Over the years snc became srl and grew thanks also to the entry of friends who developed this market together with me expanding our business in almost all of Italy. After 2007, thanks to the brilliant Basel2 agreements, if you do not know what they are I advise you to look on the web, a bestial economic crisis broke out that persuaded me to close my business in 2011. In the meantime I also found time to get married, which did not go well and which was of considerable importance in the continuation of my story so much that today I would not be here if there had not been that ugly epilogue of my love story and to attend a pizza course at the Tavola Cooking School with the Chef where I found another great mentor of mine who radically changed my life , a certain Maurizio Capodicasa.

In this period of time, however, I also did something else, as well as working in the field of graphics and the web. In 1999 I met by chance still a milestone in my journey, Ferdinando Mastroianni, a late friend and mentor who trained me in the field of time management, in focusing goals, in working in teams and in team leading, which made me discover Network Marketing and which made me even more bitter about the concept of helping others to grow them in achieving their goals. I worked with large marketing companies that adopted that concept, and with all of them I followed a training course that saw me participate, first as a student and then as a tutor. NLP, public speaking, team building, behavior analysis, analysis of the various types of communication, understand who you are in front of and then adopt the best way to get to your heart through its representation channel, advanced courses of internal analysis and even sales courses and much more. If I hadn't invested in my training, I wouldn't have been able to do the extraordinary work I've been doing for so many years.

However, after entrepreneurial success, sentimental success, as usual, life puts you at a crossroads and shuffle the cards. Everything ended, my marriage failed, after 11 years of living together, my business I decided to close it and to try to forget everything I moved to Abruzzo next to my parents. It was at least a couple of terrible years, where I really touched the bottom, where the pillars that held my life had melted with snow in the sun and where I really thought my life was now irretrievably compromised. Of course my parents were close to me, even if the conflicted relationship I had with my father aggravated my psychological situation, so much so that I got to furious quarrels because he did not see in my activity as a pizza maker a future appropriate to his expectations ... But then he believed himself, you know why? For success? For the money? No friends, not only for that, but because he saw me realized and happy and already felt the affection of thousands of followers from all over the world asking for my help and advice. My father became my fiercest fan and bombarded his friends on Whatsapp and Facebook every day with the photos I sent him from my consultations. He died on October 27, 2017, while doing my job in a restaurant in northern Italy, I greeted him the next day, after 17 hours of traveling in hell... Another test of life...

My mother and I stayed and four dogs... I had long since moved to help them when I was at home and also not to throw money for rent since I also spent more than half the year away. The consultations traveled well: Barcelona, Paris, Bristol, Prague, Almaty (Kazakhstan), Shanghai, New York, Eugene (Oregon), Miami, Dubai, Riyadh, Bremen, Bacau (Romania) and then all of Italy, from north to south... islands including... My life was full and satisfying.

Bacau, Romania, the last of my trips in October 2019. I met these customers thanks to a three-day pizza festival organized by a pizza chefs' association in Galati, Romania. They called me after some time and I went to do my job, I found i was very well and I jumped to make my life take another turn. I took the papers, rented a house in February 2020 with the plan to move in March... But then... The unimaginable... A bad flu pandemic and the world lockdown forced me to stay at home in Italy until the end of August 2020 when I was able to move with my mother and one of our 4-legged friends. Don't worry, the others are staying home guarding and are being looked after by a family friend.

We have come to the present day, life continues, the pandemic will disappear and we will all start living normally again, but I told you my story, first, because so you really know who I am and how I came to do what I do, but I did it above all because I want a concept to be clear: Change is not something to be afraid of and the search for happiness must push us to always improve our condition and above all we must not be afraid to get back in the game!

In the sign of change my life unfolds and from August 27, 2020 my mother and I moved to Romania. At first rented in a nice little house in the city of Bacau, and then bought a villa in the countryside in the province of Focsani. Since that distant August I have developed my market in Romania a lot and I have had the opportunity to visit this splendid country far and wide. Now I am part of a group of entrepreneurs with whom we have opened the first large laboratory for the production of bases for pinsa, Roman pan and sandwiches. In the future there are many things, but I will reveal them to you little by little...

Life is beautiful and must be lived to the end, without fear, with courage and a little unconsciousness, healthy.

To quote a verse by Quintus Horace Flaccus taken in the famous film L'Attimo fuggente:

Take the rose when it's time,

that time, you know, flies,

and the same flower that blooms today,

So I leave you to the navigation of my site with the hope that you can always achieve your goals and fulfill your dreams.

To my Mentors (on the date of appearance in my journey on this Earth): Alessandro Molfese, Luigi Canali De Rossi, Ferdinando Mastroianni, Maurizio Capodicasa, Fausto Lorenzoni.

And to my parents, of course...
- Fabrizio Sacchi